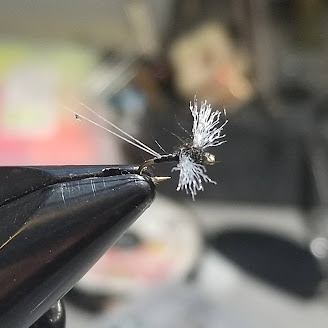 The largest Trico swarm that I ever saw was on the Millers at the Upper Trestle Pool one August morning. The morning sun shining off the tiny wings looked like someone had dumped a 100 lb bag of mica shards from a low flying airplane.  I’d like to say that every brown in the river hit the surface that morning but nothing happened.  Tricos are everywhere on the Millers as I’ve seen hundreds caught in spiderwebs  at the Arch Street Bridge.  In fact, most trout streams have them but not in the epic numbers as the Farmy and other lucky streams. 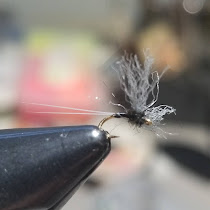 1. August is the month for this fly. Some places have a July emergence and some rivers have good numbers right into September. And it’s a long hatch so  your chances of missing it are slim unless you’re there at the wrong time of day or know little about this fly.

2. It’s the spinner stage that gets the attention of trout and trout fishers.  Size 20 through size 26. Here’s a trick that works on all small flies: Tie your size 26 on a size 22 hook as seen above.  You will have more hooking power with a larger gap hook and the trout don’t seem to care.

3. Two long tails are all that you need even though the natural has 3. I use the finest of mono tail material for the tails.  The wings are the most important element of the artificial.  I’ve seen EVERYTHING used for the wing but the best material is ultra fine post wing material.  CDC looks good but doesn’t stand up with the constant false casting  that’s required. Also CDC gets slimed easily and then becomes next to useless.

3. A standard dry fly hook will work as will a light wire caddis pupae hook.  Tie in the tails and then tie in the SPARSE wing material on the oversized side (you’ll cut is short at the end) at the thorax position.  The body is nothing more than black thread and the slightly oversized thorax (I use black rabbit) is used to fan out the wings. The basic mistake in tying this fly is that the wings are too short. The natural has wings that seem large in proportion to the body. Trim the wings on the long side.  The ultra fine post wing material is visible on the water but you can always fluff up some of it to improve visibility and it dries/cleans up great with silica powder.

The Flow On The Swift

It seems to have settled in at 129 cfs which should hold there until we get some REAL rain.  129 is very fishable but the fish need a few days to adjust to it. They seemed to have adjusted this morning with 7 brookies and two bows coming to the net but the rainbows have spawned a question with me.  It has been about 1 1/2 months since the big stocking but these bows are still acting like freshly stocked hatchery fish – all schooled up and chasing each other. The brookies are holding in feeding positions and the browns ambush out of nowhere but the bows act like dopes!  A comment from NH mentioned this last week and I think he has something.  I should reread that book about rainbows called the Totally Artificial Fish!!

Pray for rain – lots of it.