The NEW Landlocked Salmon, Poaching Alert And Book me

Fish sense, applied in the field, is what the old Zen masters would call enlightenment: simply the ability to see what’s right there in front of you without having to sift through a lot of thoughts and theories and, yes, expensive fishing tackle.
John Gierach 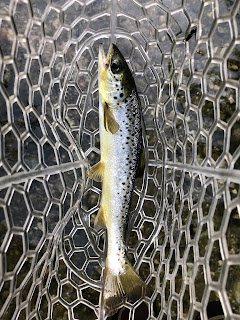 The first inkling of this “strange fish” occurred last Fall when reports out of Bondsville (thank you Sam) mentioned an odd looking brown, a light colored fish that began to show up on the lower Swift.  Double haul to the present month and the reports, photos and video (thank you Falsecast) of the same kind of fish being taken above route 9.  They are Landlocked Salmon for sure and are in the 7 to 10 inch range.

Where did they come from?  They could of gone over the spillway during the high water of this past Spring OR they could of been the progeny of the adult salmon that went “over the falls” in the Fall of 2018 and were seen spawning up and down the upper Swift.  As mentioned by a reader of this blog these fish would be the right size for a salmon that hatched in early winter of 2018/2019.  The main question is did they go over the spillway or were they born in the river?

Now, our DFW may have answer with all of the electroshocking that’s been done over the past two summers but we really don’t hear much from them, do we.

Going forward, if you catch a “strange looking brown” let me know.  If these fish are born in the river then we have another Mother Nature success story.

BTW, I saw two DFW employees down at the Horse Farm bend with an electro shocking pack and DIP NETS on Monday morning.  The only fish you would use a dip net on would be for fingerling brookies.  I wonder what that’s all about?

There they were on Tuesday morning, 4 or 5 brook trout heads in the water about a few hundred yards below the Horse Farm. Those trout heads were not there Monday morning but 3 anglers were. One was flyfishing and the other two had spinning gear and were drifting what appeared to be large flies under bobbers.  The call is in to watch for these guys or anyone else breaking the law on the Swift. 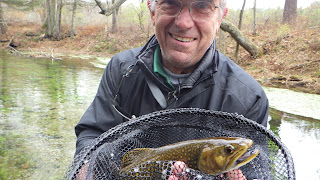 We are approaching the latter part of Summer and will soon be on the cusp of Autumn which is when the best central Ma fishing occurs.  It’s not too early to book your trips to the Swift, Millers, Ware or the EB.  Every year people wait to the last minute and get left out or have to settle for a less than perfect date.  Book Now – I don’t take deposits so your money isn’t tied up for weeks or months.  It’s the perfect deal!!