Skip to the content
Search
flies for sale fly fishing and guiding on the Swift River Ken Elmer Fly fishing guide on the Millers Ken Elmer Guided Fly Fishing On The Swift. EB 2 months ago

My Favorite Trout And Crowded Water

admin
The greatest enemy of “good” is “better” Voltaire”

There are three species of trout that live in the Swift. I love all of them but not to the same degree. Let me rank them from worst to first. (I hate saying something is “worst” but it rhymes in a nice way). Number 3 is my least favorite and number 1 is the best. 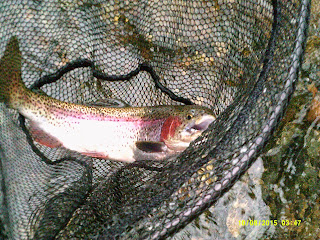 “Wow, I just caught a 20 inch rainbow!”  We have all heard that statement but what does it mean?  I’ll tell you what it means. If you are in Massachusetts or in most of the streams  in the eastern U.S. you have caught a hatchery raised  rainbow trout. The river that you caught it in probably doesn’t have a ghost of a chance of “raising” a bow of that size let alone  one of them holding over through the winter into the next season.  The vast majority of rainbows in this country (except the Rockies and Alaska) are the product  our hatchery system(s).  Massachusetts raises some very big bows and I have clients from New Hampshire who fish this state because “the rainbows are bigger”.  It’s  not that our rivers are any better it’s just that the hatcheries are and there  lies the problem.  One day the trout are few but the next day they’re swimming between our legs! There is an artificiality to this reliance on rainbow trout which is a trout that is fairly easy to grow and and grows large but does not reproduce in most Ma. waters. 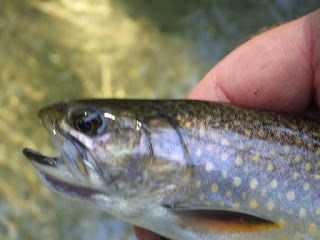 Now some may thumb their nose at an 8 to 10 inch brookie and that is too bad for them.  I for one would rather catch a 10 inch brook trout than a 15 inch bow ANY DAY.  Why??  BECAUSE IT’S WILD and catching them on a 7 foot 3wt bamboo rod just can’t be beat.

This is truly the Ghost of the Swift.  They are there and in fairly good numbers but they  play it safe by hiding next to logs and under cut banks AND avoiding full sunlight. 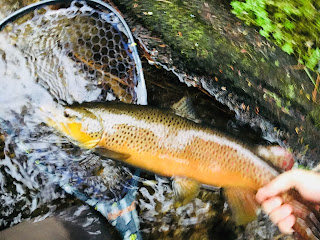 Our browns can thank the huge brook trout population for their monster size and there is not a brook trout in the Swift that would be safe from  the 22 pounder sampled by the DFW last year.  I’ve seen them over 10 pounds and have caught one about 5 pounds a few years ago.

It appears that reproduction is low and I’m wondering if some additional browns stocked instead of the clonebows would help.

If you are fishing crowded water and feel that you are being squeezed by other anglers then you have nobody to blame but yourself.  Crowded water will always bring out the worst in many people so why be part of the problem.  I know that many really relish the “herd mentality” and probably feel safe with people around.  I look to avoid them.  That’s easy on the Millers and the EB and is actually easy on the Swift except for the kayaks.  EXPLORE, EXPLORE, EXPLORE!!!!!