Engle’s Little Blue Midge, Things I’d Like To See Happen And Book Me

admin
“Sell a man a fish and he eats for a day. Teach a man how to fish and you ruin a wonderful business opportunity” – Karl Marx (yes, he did say that) 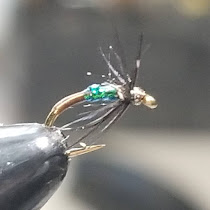 I’ve always been a fan of  writer Ed Engle.  I like him because he is not a flyfishing tech/equipment junkie, fishes bamboo rods, is a good friend of John Gierach and creates some interesting and effective flies.
At the end of one of his books he gives the recipe for his “blue midge” which he claims is a must-have-go-to fly for tailwaters during the Winter.  He credits its success to the blue mylar used in its construction.  First, this fly is not just for the Winter.  I first tied one onto a clients leader back in January and it caught fish.  I then promptly forgot about it until this past week when we needed something to wake up some Swift River bows.  It did on Friday and really did yesterday with brookies getting into the act. It also accounted for a good double digit day down in Cady Lane. It is a good, general purpose midge fly fished alone or behind a soft hackle (what else). Here is my version which is SH style (again, what else):
Hook – size 18 through 24 shrimp/caddis pupae hook
Thread – 12/0
Body – brown or black thread for the rear half of the body, Pearl Crystal Flash for the thorax (Engle says that the color should be blue.  My crystal flash isn’t blue enough so I doctor it up with a blue sharpie)
Hackle – two turns of starling. I’ve seen some midges tied with CDC for the hackle.  Don’t waste your time with that flimsy stuff on a subsurface offering.  Starling is better. 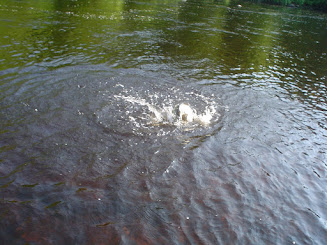 Things I’d Like To See
1. A surtax on kayaks and canoes earmarked for conservation and wildlife habitat like the surtax that recreational fishers pay ON ALL FISHING EQUIPMENT.  If you are going to use the resource then you should pay for it! (some “birders” have gotten into the habit of buying a duck stamp even if they don’t hunt because the $$$ goes to habitat.  Good Move!!)
2. A Trout Stamp!  If you want to fish moving water (streams/rivers) you need to buy a trout stamp with the money going to habitat and conservation and with the aim to develop self sustaining trout populations.  $30 per year sounds fair because fishers know how to spend money and it’s money well spent.
Things I Don’t Want To See
The great John Gierach once said that there’s no such thing as a fishing dog.  I agree after I saw one fly fisher let his mutt chase spawning brookies on the Swift. He looked like I was infringing on his constitution rights when I said that he should restrain his pooch.  He did but probably resumed the chase game after I left.
Book Me
Right now the Swift is really the only local game in town and what a game it is.  I and my clients have fished in wonderful solitude this summer with no other anglers crowding us out.  This is especially true for our evening trips.  It can be almost lonely out there with only the trout to keep us company.
Book a trip!!!
Ken