Brookies, Rainbows, A Brown And A Big Smallie On The Swift

“ I knew by now that one of the pitfalls of falling in love with old bamboo fly rods was that there was no end to the number you could collect.  You could rationalize this in various ways.  You could say, for example, that going on a fishing trip with only two rods was like playing Saint Andrews with only two golf clubs.” – George Black 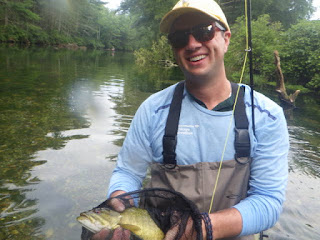 We were after rainbows that were slurping in sulphurs which really didn’t happen.  There were fits and starts of a sulphur hatch but the brookies (good size with one around 14 inches) would beat the bows to the prize, at least that was our going excuse.

One of my clients dropped a good bow on a size 14 Partridge and Orange (what else) but then took a brown of about 14 inches on the same fly AND then had a subtle hit that took off like a rocket.  It was big and somewhat the color of a brown but then as my client stopped its upstream charge I saw, as it turned, that it was a smallmouth bass!!  It fought like a demon and when it got to the net it was a full 15 inches and with a weight guessed at 2 to 2.5lbs.  It was FAT and really a great break from from the usual fare.  I take back everything bad that I ever said about their presence in the Swift.

BTW, the fly was a size 14 Partridge and Orange again. 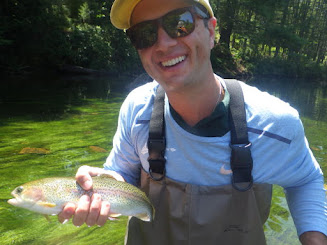 Brookies continued to be caught but finally a good bow came to the net courtesy of an Ed Engle midge that I fonld in one of my Ed Engle books.  I can’t remember the name of the fly but the secret sauce is a BLUE mylar body.  I threw on an olive thorax and some black starling on a size 20 hook.  Engle swears that this is his favorite midge pattern and that’s good enough for me.

In less than 60 days we will be in October and that is, along with November, my favorite times to fly fish in central New England. The weather is balmy with the heat of summer is a memory and the rivers are usually in great shape.  Also the DFW throws in an autumn gift with another stocking.  I book up quickly and that has already started.  Pick a date, no deposit required, and we will be all set.