‘ Something to think about: if you fish the wrong fly long enough it will sooner or later become the right fly.” – John Gierach 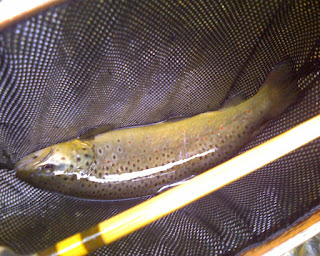 It was a bamboo week on the Swift for sure.  In my 50 years of flyfishing I never saw a collection on cane addicts as this past week.

First it was Steve and Kristin last Sunday. I asked the usual question “what kind of rods do we have”.  First Kristin pulled out a vintage Orvis 6  ft 6 inch 4wt impregnated bamboo rod that was as close to mint condition as a 1970’s rod could get.  And it was a rocket launcher.  Steve was not to be beaten when he assembled a Ted Simroe 8 foot 4wt.  For those outside of the bamboo world Ted Simroe was one of the last artisans to work for the great Leonard Rod Company. Like the Orvis rod above it was a dream to cast.

As we made our way to our spot I noticed another angler just downstream from us and guess what?  Another bamboo guy!  That made three bamboo fans working  a 300 yard section of the river.  Not a graphite rod in sight!!!

It didn’t stop there. I had worked the river with a 6 foot 3wt Paul Young for over a week but changed over to a Rick Taupier (of Swift River Rod Company) 7.5 foot Sierra rod for a DT 4wt.  I love this rod!!!!  Then someone said “Hi” and introduced himself as Pat and if I had a few minutes he’d like to show me something.  Back he comes with a 7 foot 4wt rod made from a Payne taper.  The neat thing is that he built it by himself starting with splitting the culm (cane) which makes him a “maker” and not an “assembler’.

It seemed that I had gone back in time to when cane ruled on the Swift!!!!

The Brookies And Their Fall color.

Ok, the brook trout are not yet running to their spawning areas BUT they are certainly putting on their Fall colors.  Book me for a 3 or 6 hour trip on the Swift for this Autumn action.

BTW, I’ve heard encouraging reports about the Millers and the EB.  The trout have survived the drought and are hitting flies.  Let’s take a trip.